Bellevue, WA - June 26, 2015 (The Stuff Gazette) -- Following the U.S. Supreme Court ruling that requires all states to recognize same-sex marriages, the Citizens Committee for the Right to Keep and Bear Arms said that the same principle should apply to nationwide state recognition of concealed carry licenses and permits from all other states.

"To paraphrase what Associate Justice Anthony Kennedy said about same-sex marriage," noted CCRKBA Chairman Alan Gottlieb, "no right is more profound than the right of self-preservation, and under the Constitution, all citizens should be able to exercise the right of self-defense anywhere in the country. It disparages their ability to do so, and diminishes their personhood to deny the right to bear arms they have in their home states when they are visiting other states."

While many states recognize the concealed carry permits or licenses from other states, this is not universal. In some states, law-abiding citizens have been egregiously prosecuted for conduct that is perfectly legal in their home state. For example, New Jersey has become notorious in recent years for prosecuting honest citizens, the most recent being the unjust treatment of Shaneen Allen, the Pennsylvania single mom who had to be pardoned by Gov. Chris Christie because she crossed a bridge from one state to the other, and was honest about having a firearm when quizzed by a police officer during a traffic stop.

"State drivers' licenses are universally recognized," Gottlieb observed, "and with today's high court ruling, same-sex marriage must now be recognized in all 50 states as well. It not only stands to reason, but common sense demands that the concealed carry licenses held by more than 11 million citizens across the country should now be valid in every state without question.

"We're talking about law-abiding citizens who have gone through background checks, and in many cases, state-mandated training programs," he added. "To continue treating their Second Amendment rights as second-class privileges seems unconscionable after today's ruling."

With more than 650,000 members and supporters nationwide, the Citizens Committee for the Right to Keep and Bear Arms is one of the nation's premier gun rights organizations. As a non-profit organization, the Citizens Committee is dedicated to preserving firearms freedoms through active lobbying of elected officials and facilitating grass-roots organization of gun rights activists in local communities throughout the United States.
Posted by Shonda Ponder at 9:44 PM No comments:

Email ThisBlogThis!Share to TwitterShare to FacebookShare to Pinterest
Labels: guns

Having lost his faith many years ago, Detective Bill Broadly is called to investigate the disappearance of the local church's collection plate. As he questions its various church members, rumors swirl as more congregants learn about the theft. When one unexpected church-goer confesses to stealing the funds, the confession resurrects Broadly's views on God, and helps him see that through faith and belief there really is rebirth and redemption.

Posted by Shonda Ponder at 2:03 PM No comments: 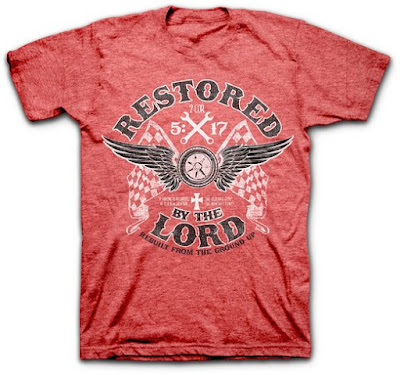 Buy the T-Shirt by clicking HERE
You'll restore than temporary items with the Restored By The Lord red heather t-shirt. This Christian t-shirt is based on Jesus making all things new in 2 Corinthians 5:17 "therefore if anyone is in Christ, the new creation has come: the old has gone, the new is here!"
Posted by Shonda Ponder at 12:58 PM No comments:

Armed and dangerous - ready for spiritual warfare! The weapons owe fight with are not the weapons of the world. On the contrary, they have divine power to demolish strongholds. - 2 Corinthians 10:4
Posted by Shonda Ponder at 12:54 PM No comments:

Jesus is the Answer to Cancer 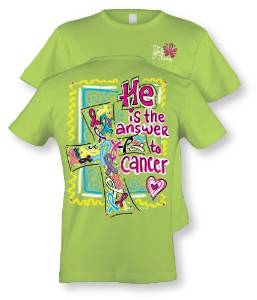 Jesus is the Answer to Cancer! Buy the T-Shirt by clicking HERE!

Posted by Shonda Ponder at 10:12 AM No comments: